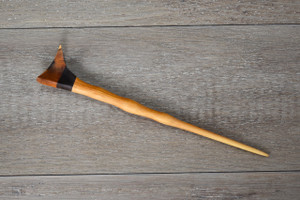 This unusual handcrafted hair pin is made from Yew and American Black Walnut wood with a hidden Brass pin through the centre for added strength. The Yew wood has deep orange grain pattern with a patch of red and purple at the top of the pin and a pale section of sapwood to finish the very tip of the delicate curl. The Yew wood is contrasted by a section of dark Black Walnut.

American Black Walnut grows in Canada and Northern America.  It is a prized wood for cabinetmaking and provides some pretty tasty nuts.  The hair pin has been made from wood that would have otherwise been thrown away or burnt.

This pin is finished with Nutshell wax.  The product is eco friendly and non toxic, blending selected beeswax, Larch oil and essential oils to give your hairpin years of protection.  It also uses no VOC's, formaldehyde or petrochemicals.