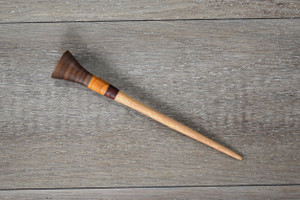 This small handcrafted hair pin is made from American Black Walnut, Yew, Purpleheart and Beech wood with a Brass pin for added strength.  The Walnut grain pattern features a series of dark lines running round the top the piece.  The light reflects off a section of the grain as you turn the pin. The Section of Yew has deep orange grain contrasted by the deep hue of Purpleheart. Beech wood finishes the rest of the length making a very strong and dainty pin.

American Black Walnut grows in Canada and Northern America.  It is a prized wood for cabinetmaking and provides some pretty tasty nuts.  The hair pin has been made from wood that would have otherwise been thrown away or burnt.

Purpleheart is a very strong wood from south America.  This piece was left over from a local carpentry workshop. It is one of my favourite woods to work with.

European Beech is commonly found across Europe and western Asia. It has been used for centuries in furniture making and for building musical instruments. This piece was left over from reclaimed planks that I used to build my workshop bench. Research has revealed that Beech trees prefer the company of other beech trees and often fuse their root systems together to equalise their photosynthesis. In this way the trees can share immunity and strength.

This pin is finished with Nutshell wax.  The product is eco friendly and non toxic, blending selected beeswax, Larch oil and essential oils to give your hairpin years of protection.  It also uses no VOC's, formaldehyde or petrochemicals.