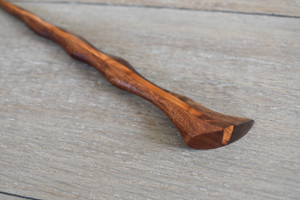 This handcrafted hair fork is made from Walnut, Sapele and Yew wood.  The dark Walnut and lustrous red tone of the Sapele are contrasted with a heart of golden Yew wood running down the centre of the pin. A very strong and sturdy pin.

American Black Walnut grows in Canada and Northern America.  It is a prized wood for cabinetmaking and provides some pretty tasty nuts.  This hair pin has been made from wood that would have otherwise been thrown away or burnt.

Sapele Mahogany comes from West, Central and East Africa.  It is often used in furniture and cabinet making and as a veneer for marquetry. It is also used in the construction of musical instruments, for building boats and as a flooring material.  This piece arrived in its previous life as offcuts of flooring that would have otherwise been thrown away or burnt.

This pin is finished with Nutshell wax.  The product is eco friendly and non toxic, blending selected beeswax, Larch oil and essential oils to give your hair pin years of protection. It also uses no  VOC's, formaldehyde or petrochemicals.